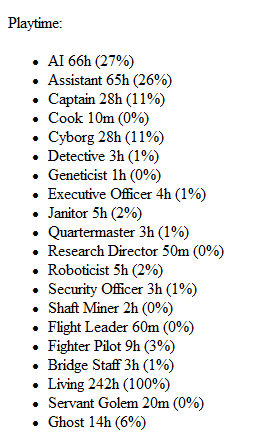 Experience with NSV mechanics: Significant.
Why do you want to be a mentor: Since we’re now completely 24/7 and we have alot of new players, I’d like to be able to teach them, especially since they probably won’t be used to the higher RP standards NSV13 has compared to Beestation

#1 Detail how you start a fighter and take off: Flip the battery switch, then the fuel injector switch, and then the APU switch. Then wait on the RPM gauge to fill and then flip the ignition switch.
#2 What parts does one need to start constructing a torpedo?: A warhead, components, and a casing.
#3 What is a good entry role for those new to NSV?: Munitions technician. NSV is more advanced than most SS13 servers and has a higher standard, so it would generally be safe to assume that majority of players have played SS13 before. Munitions technician is a job where you can easily learn majority of the mechanics for the server without having to worry about screwing something up.
#4 What is a good entry role for those new to SS13?: Assistant. They can take on a role as a junior-anything and learn things.
#5 Is an XO supposed to just act like a HoP?: No. The XO has to manage squads, is the second in command of the ship and next in line for Acting Captain when the captain is unavailable, and is expected to handle things as the captain would. This includes directing the CIC, resolving issues preventing the ship from accomplishing its mission, and making the round more enjoyable.
#6 What is the difference between a Railgun and a Mac cannon? MACs must be reloaded immediately after usage, but is otherwise identical to the railgun.
#7 What is the difference between flying a regular fighter and flying the main ship? The main ship is controlled with two consoles and requires two people to properly operate it. The fighters also require fuel, parts, and ignition/shut down sequences.
#8 How do you exit an AI shell? By using the return to core button, at the top left of your screen…
#9 Detail a stormdrive setup for beginners: Make a fuel mix of… 75% N2O, and 25% constricted plasma, and that should be safe. Then, raise control rods to the “Safe/low temperature” operation and raise the temperature to over 100, that should get the storm-drive active, and a beginner should probably be able to handle things from there.
#10 Detail the steps to take if the Stormdrive is close to melting down: Flush the old fuel, Dump cooling gas in it (such as water vapor or pure N2), and lower the control rods to a point where they cool off the SD without destroying rod integrity.
#11 What is your favorite color? Brick

Brick is cool, definitely deserve a plus one, don’t know about other roles but he can definitely help you with combat and AI manouvers. Great person, going to be good mentor from what I can tell.

-1
Denied due to past conduct as staff.