CKEY: Ondrej008
Discord Name: Bodyguard of Joe Czanek (ondrej008#3301)
Living Playtime (OOC: View Tracked Playtime): 27h (26h/1h)
Experience with NSV mechanics: Stormdrive, ship & fighter maintenance. Munitions. I haven’t had any experience with mining, however. I think miners just go to the overmap asteroids and mine them, somehow. Then there’s a bluespace miner.
Why do you want to be a mentor: So that I can answer my own mhelps. And help other people. Mostly the first though.

#1 What does an ATC do?: They manage and launch fighters. They’re practically the head of the hangar bay. They also should tell you the number and type of hostiles in the system.
#2 What parts does one need to start constructing a torpedo?: Get parts from Cargo or apparently you can print them if they’re researched, though I haven’t seen that yet.
Pre-built torp casing -> propulsion system -> wrench -> guidance system -> screwdriver -> IFF -> screwdriver -> warhead -> wrench -> wire -> wrench -> weld -> load into torp tube
#3 What is a good entry role for those new to NSV?: Fighter Pilot or Munitions Technician, FP is a less of a responsibility than Bridge Staff but still offers pretty much the same mechanics. MT is similiar except you’re the man behind the reloading instead of the one behing the shooting (unless you get in a gauss gun).
#4 What is a good entry role for those new to SS13?: Assistant for figuring out the basic controls and stuff. Then I’d recommend Miner as that teaches you a lot of concepts like lockers, internals, EVA movement and stuff.
#5 Is an XO supposed to just act like a HoP?: Yes, but depends how you think HoP acts. XO is the head of Cargo, despite there being the QM, which is the canon head of Cargo. XO is also the person usually in charge of providing access and job changes, though other heads can give access and make a ghetto job change.
#6 Build torp?: Put SM on torp.

Overall decent app, but I would like for you to have some more playtime on server first than just “

” as you have put. -1
Most mentors here have roughly 35-40 hours of living playtime.

there because I couldn’t view tracked playtime as the server was offline, but turns out that you can use the >ckey command in the discord to get the playtime, which I have done so and edited the post, I have 26 living playtime hours, which is 9-14 hours less than your rough amount of mentor playtime.

Aighty, due to the current playtime amount, I’m going to be putting this app on-hold for review at the moment, and I’ll bring it up as to wait for playtime hours or not. As you’re generally unknown to me (which is theoretically a potentially good thing considering how much I have my face stuck in ahelps (or bugtesting) 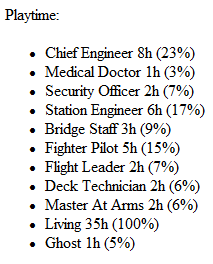 So, I told you 35-40 hours, you now have 104 hours. For a 200+% delay in my response. And I’ve not heard of any serious administrative issues. Sorry about the late response, but I’ll start getting it moving forward again.

While you are technically knowledgeable at this point in time, I cannot in good conscience recommend you for the mentor team due to your conduct on our Discord server. We want a very specific sort of individual displaying a good sense of self-control, respect, and decency which I cannot in good faith claim you present.