ADMIN BYOND KEY: rukofamicom
REASON FOR BAN: “WHAT THE FUCK KIND OF SERVER BANS ANTAG MURDERBONING, Fuck it, going DNR and leaving this hellhole for good.” As BB plasma-flooded station against their brother’s wishes and against the server rules. Put their brother at great danger doing so, and has a past note for doing similar already. Don’t let the door hit you on the way out. "
YOUR APPEAL: The ban was a year ago and completely unrelated to NSV13. Additionally, the ban was originally placed on BeeStation LRP - not BeeStation MRP. I have no regrets (which is why I’m appealing this on NSV, not Bee; I have no desire to join that hellhole ever again), but I can assure you, I won’t go murderboning as an ordinary antagonist on NSV.

Looking into the situation, I’d like to ask for a vouch from a server you’ve played on consistently since the ban.

Additionally, being that we are one of “The kind of server[s] that bans antag murderboning” I would like to know your thoughts on that.

Does Civ13 count? It’s pretty much the only server I’ve played consistently since then, and it doesn’t even have antagonists (instead, it uses a standard escalation system, in which you can kill anyone provided they have not met the terms of an ultimatum you issue prior, such as “Give me your backpack!”, though that is a slight simplification). It is, however, MRP/HRP, and people actually bother to roleplay there.

On the topic of murderboning, I’m only really interested in playing engineering roles anyway. I still consider murderboning rules to be stupid to the point of insanity, sucking any and all fun out of antagonist roles by making them eternally fearful of incurring the wrath of the admins whenever they cause minor collateral damage in the course of pursuing their objectives, but such a severe reaction to the Bee incident was largely due to the fact that I didn’t “get the memo” about the rules change; I was still thinking with the old rules, where you could go on a killing spree after fulfilling at least half of your objectives; turns out that they changed it months prior, and I simply hadn’t received any notification of this fact. 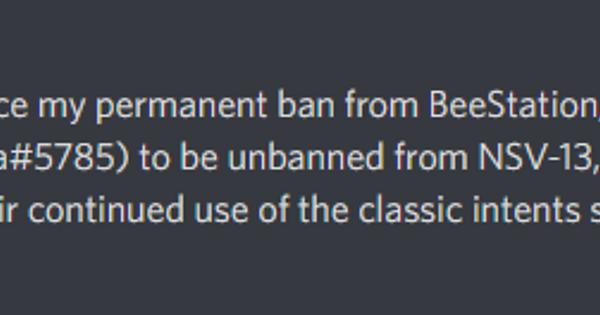 A second vouch, this being delivered directly from the most esteemed Princeps Senatus of SinguloStation.

Sorry about the late reply. About the time this was happening my Fridge decided to nope out, and a chain proceeded from there. I see you’ve since gotten a Vouch that isn’t an… interesting… self-vouch. I’ll discuss with Altangy about it once he’s woken up tomorrow.

Apparently the bot thought this was spam, at first I had thought you had deleted it because it’s a copy of your self-vouch.

After discussion the ban has been lifted, please make sure you don’t actively murderbone here. [ACCEPTED]