ADMIN BYOND KEY: Sergei Koralev
REASON FOR BAN: “Made “uwu” as a mime name. No, just no. Appeal specifically to KMC.”
YOUR APPEAL: I joined the round as a mime named uwu. I received an ahelp from Sergei saying the name is against the rules.

He cited the roleplay rule #3:
Use a reasonable, lore-friendly character name.
Your character must have a unique first and last name. One-word nicknames are allowed inside the name (e.g. Derek ‘Double-D’ Donahue, Jane ‘Crusher’ Sanchez) . Ranks, titles, honorifics, offensive, famous and/or pop-culture names are not allowed (e.g. Dr John Smith, Barack Obama, Lt John Doe, Adolf Hitler). Clowns, mimes, and wizards do not have to follow this rule.

However, the rule makes it clear at the end that clowns, mimes, and wizards are exempt from the rule about names. While my name was weird, it was clearly permitted.
The rules are on my side, and the ban should never have been applied in the first place.

It is important to point out that this ban is baseless. The ban reasons says, “no, just no” as the justification for the ban.
It seems apparent Sergei did not cite a rule because the rule which he used to ban me is actually the one that vindicates me.

Lastly, even if you are to argue that the rules don’t matter (for whatever reason), a HALF YEAR ban is incredibly harsh. Even a day ban would be pushing it.
There are other options available to admins who disagree with a player’s naming choices, specifically name bans which force random name every round.
In conclusion, there is no basis for this incredibly harsh and unfair ban, as my actions were completely within the rules. I ask that the ban be lifted.

That feel you get banned for a rule that says you can do that exact thing you got banned for.
And the ban length is six fucking months. 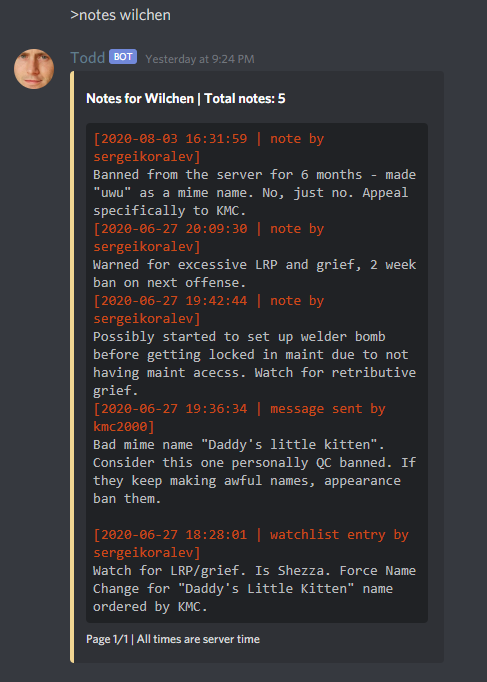 You were actually banned over rules zero and one specifically.

You cite rules 0 and 1 for this ban, however, you never mentioned either of these rules in ahelps. They are not cited in the ban reason, either.
Rule 0 is not a catch-all way to ban someone for no reason. The end of rule 0 states:
“they [admins] will be fully accountable for their actions should they choose to exercise this privilege.”
So, you need to justify how you are:

The funny part is, you cite my notes (the last of which being 2 months ago), but you clearly did not read them.
KMC wrote in a note, “if they keep making awful names, appearance ban them”. Instead, you ignored this note and gave me a 6 month ban for a funny name.

Rule 0 exists because rules can’t cover every existing case. That is fine.
What is not fine, however, is punishing a player for doing something explicitly allowed by the rules, and using rule 0 as justification.
If you are going to punish players for following rules exactly as they are written, they had might as well not exist.

This ban is ridiculous and should not have ever been applied.

In your notes, you were warned about using blatantly awful mime names, several times. While this may not be strictly against the rule “Your character must have a unique first and last name. One-word nicknames are allowed inside the name (e.g. Derek ‘Double-D’ Donahue, Jane ‘Crusher’ Sanchez) . Ranks, titles, honorifics, offensive, famous and/or pop-culture names are not allowed (e.g. Dr John Smith, Barack Obama, Lt John Doe, Adolf Hitler). Clowns, mimes, and wizards do not have to follow this rule” your mime names were used only to irritate people, and I distinctly remember you confirming this yourself, as you thrived off of your mime names causing issues.

Quite frankly though, this ban represents more than just an irritating mime name. I feel in fact, that this name was just the last straw with you. Let me state clear as day. I do not want catgirl mimes named “Uwu” on my server, ever. Perhaps the naming rule should be updated to reflect this, I’ll give you that.

In any case. With this ban you’re repeating the cycle of what makes you so taxing to deal with. You’ll do something to skirt the rules and just barely avoid a ban, with the express purpose of causing as much irritation as possible without strictly breaking the rules; something which you are in fact a master of. If / when you end up banned, you run off and bring Nervere in to loudly protest on your behalf, as you have done now with this “lawyer” / “plaintiff” e-couple act. Enough is enough, really. This ban to me represents my administrative team being fed up of dealing with you, your constant skirting of the rules, your intentionally inflammatory playstyle and the counter-productive anime cat culture you seem to propagate just by existing as a felinid on our server. This aside. I don’t hate you as a person. You have not been banned in Discord because frankly, outside of game channels? You’re not the worst. But. If you want to participate in NSV13, your attitude needs to improve. I doubt it will, I don’t think you can do it. I think you play SS13 in the way you do because that’s what’s fun to you: but it’s not fun for anyone else, and just leads my admins to get extremely tired and frustrated when they have to deal with you.

This appeal in my eyes, due to the insanely long ban duration for a “minor” rulebreak on the surface, is centered around your character. Let me finish with this. I will consider this appeal if you can convince my staff team to continue dealing with you, as I find myself asking whether I should inflict the guaranteed strain of having you around on my already taxed admins.

Have a nice day, consider what I’ve written. I’ve emboldened the parts that you really need to focus on, the rest is justification for my viewpoint. -K

You are, in my experience and the experience of numerous other staff members, the exact reason why HRP servers must have LITERAL LEGAL DOCUMENTS for rules, because you take the word, not the spirit, and you’ve proven this time and time again here, and on other servers.

I mean, isnt the very job of the mime/clown to be an irritating little shit?

Their job is to be a funny haha man/woman for the crew, not to piss off the admin team

I find it interesting to note some of your previous mime names as well. Let me pull them up…

First I would like to point out that “UwU” is OOC in IC/netspeak.
I believe I have actually Bwoinked you previously and warned you about OwO as a mime name previously on NSV (basically an alternate version of UwU) asking you what you wanted the name changed to, to which I got minimal reply and no real answer before varediting it to a default style name, with a similar ticket occuring with ‘HP DeskJet Compact All-In-One Printer’ after KMC had warned and noted you, which rather quite feels like you making an obsessively long and disruptive name on purpose due to his warning.

Second, I would like to re-iterate what KMC said about constant rule skirting by pointing out that I have repeatedly had to warn you about NSFW posts and each time you have fought me on it using excuses such as “it’s just a silhouette”. You seemingly always jump on any available “janni’s bad” train you can even with little to no information on the situation. And despite the drain on my sanity I would like to remind you of a specific time when it wasn’t just skirting a rule, but blatantly breaking it because you were told it existed. When on DS13’s discord, I warned and deleted an NSFW post from you, to which your reply was to then post an uncensored gif of a man in bondage gear committing blatant self-mutilation stabbing rebar into his genitalia in plain view of the camera. Needless to say, it feels as though this is your entire existence. 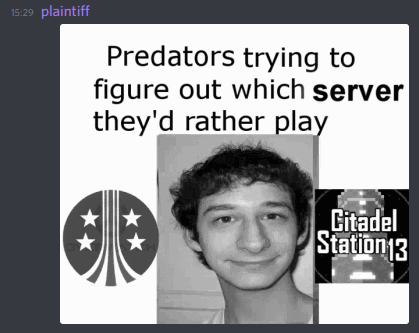 This represents your continued belligerence to any sort of administrative action, short of a swift kick out.

Given the inactivity of the applicant and the general agreement of staff that it would take a miracle to NOT unban him this soon the application is henceforth Denied.